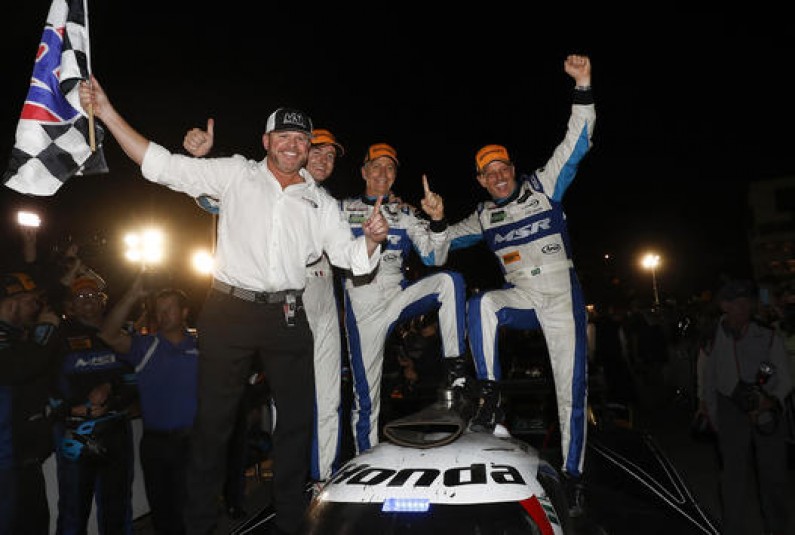 “It was a dream weekend from the beginning,” said Pla, who won his second TOTAL Pole Award in Friday’s qualifying session. “I had a really good feeling and sometimes it works. I always go for it, but I really wanted this one.”

Pla was joined by Ozz Negri and John Pew in the No. 60 Michael Shank Racing Curb Records/AERO Honda Ligier JS P2, leading 230 of the 412 laps in their second victory of the season. After 10 hours of competition, Pla beat Derani to the checkered flag by 3.524 seconds, stopping a late-race charge by the Daytona and Sebring-winning No. 2 Tequila Patrón ESM Honda Ligier JS P2 co-driven by Scott Sharp and Johannes van Overbeek.

“I was catching him a little bit at the end, but unfortunately there were a few GT cars between us at the restart,” said Derani. “It was a great result for Ligier. We couldn’t do it this time, but congratulations to Ollie (Pla) and his team.”

To celebrate its 250th Prototype race, Michael Shank Racing featured a red, white and blue livery on the No. 60 and invited spectators from the outstanding crowd to autograph the race car during the pre-race grid walk.

The race also marked the final appearance of the Daytona Prototype, which has competed in North America since 2003. Brothers Ricky and Jordan Taylor, joined by Max Angelelli, finished third in the No. 10 Konica Minolta Corvette Daytona Prototype, taking the podium position from the championship-bound Curran and Cameron in the closing laps.

“It felt like a real fight the whole year,” said Cameron, joined by Curran and recently crowned IndyCar champion Simon Pagenaud for the finale in the No. 31 Action Express Racing Whelen Corvette DP. “This is a very stressful race, there are a lot of things that go wrong.”

Christian Fittipaldi and Joao Barbosa lost out on a third consecutive Prototype title, but placed fifth in the No. 5 Mustang Sampling Corvette DP co-driving with Filipe Albuquerque. The pair managed to edge the Tequila Patrón ESM team for the Tequila Patrón North American Endurance Cup, 43-41.
“Winning the third straight Patrón Cup was a great achievement,” Fittipaldi said. “We still finished second in the championship, which is not a bad accomplishment. Congratulations to the No. 31 car.”

Pew wrapped up his career as a full-time driver with the victory. Competing with Michael Shank Racing since 2007, winning four of his 113 races – including the 50th Rolex 24 At Daytona in 2012.
“We had a little problem on our pit stop when I went in early and came out last, but I had fun coming up through traffic,” Pew said. “Great place and great weather. It’s great to go out with a win, but it also makes it very hard to quit. It’s been a fantastic 10 years.”

The 2016 champions will be honored at the annual WeatherTech Night of Champions at the Chateau Elan Resort and Winery on Monday evening in Braselton.
There will be a three-hour Petit Le Mans presented by Harrah’s Cherokee Casino Resort highlight program on FS1 on Monday, Oct. 3, at 7 p.m. ET.