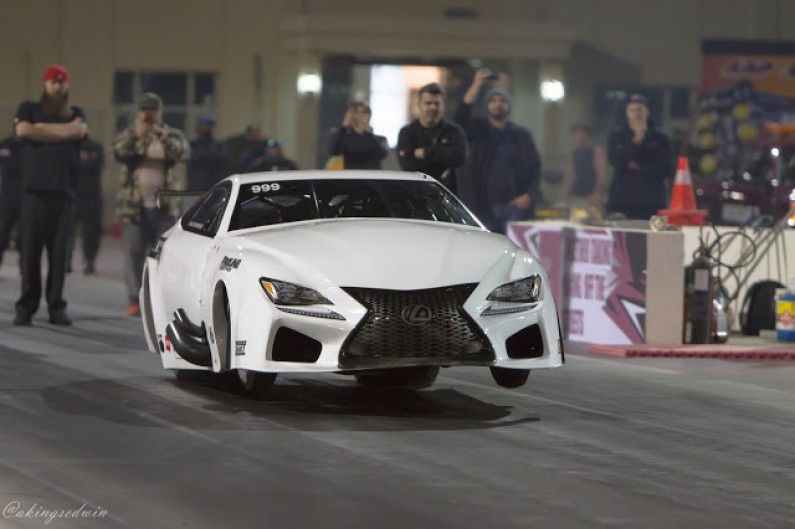 Today was another proud day for  EKanoo Racing. Their steady progress through the efforts of their engineers, @reeslyn_innovations , @millerracecars and @tunedbyshanet have found ways to improve the Lexus Pro Boost RCF. Today they made the decision as a team to try to achieve perhaps the last great milestone for door slammer racing, 280 miles per hour. They came up short but only just, becoming the first Doorslammer in the universe to eclipse the 5.3 second zone with a great 5.379 at a subpar 278.79 miles per hour. Just when the excitement reached a peak their masterful driver @khalidmohammed71 , had his hands full stopping our World Record breaking Lexus. Only one chute deployed properly, and the side door skin on the passenger side ripped free. In addition, since the car was wheelieing all the way to the finishline, a shower of sparks erupted as the front end slammed back to earth and scraped the titanium chassis savers along the pavement. Again with heroic effort, Khalid managed to stop the beast short of the sand trap, albeit taking both front tires down to the rim and performing some drift maneuvers to scrub speed. With his tires gone he touched the retaining while slightly and saved our precious race car and himself in the process. #94mm#m1army #atomizerracinginjectors #wiredbyg Built by EKanooRacing , Kingdom of Bahrain Powered by ProLine Racing Hemi Engine Management Motec M150