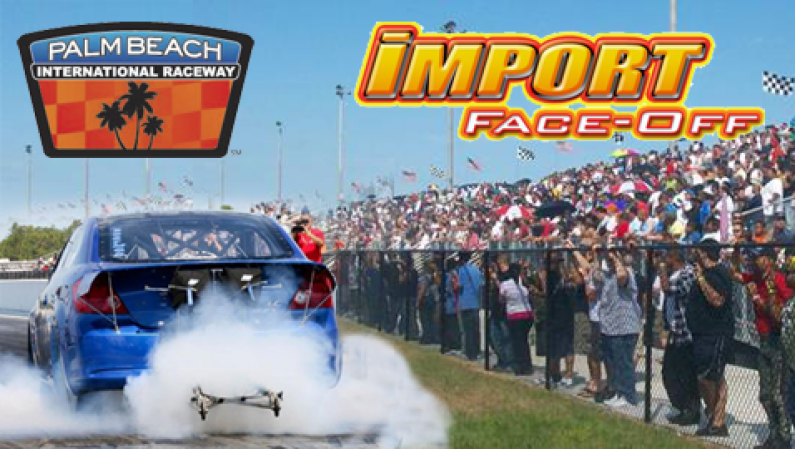 OnApril 29th, Palm Beach International Raceway will host motorsports event,Import Face-Off, featuring racing on the drag strip, drifting on the road course,imports car show, automotive & vendor midway and entertainment. Import Face-Off is the largest national import racing series and has ushered in a new era of drag racing that targets the young, active and outgoing racer and motorsports enthusiast. Import-Face Off has turned drag racing into a lifestyle event with the ultimate party atmosphere.

PBIRâ€™s Quarter Mile Drag Strip Heats up with the Ultimate Motorsports Lifestyle Event of the Year.

The stakes will be high as racers get behind the wheel to battle in head-to-head import drag racing and burnout contest for a chance to win thousands in cash prizes. Drag classes will include FWD, Outlaw Quick, All Motor Pro, Bracket Class, Forced Induction Pro, Forced Induction Sport, and All Motor Sport. The rivalry on track will extend to the custom and iconic vehicles on display in a cash-prize car show.

â€œPBIRâ€™s local drivers are the driving force behind bringing an event of extreme competition and popularity to the track,â€ said Jason Rittenberry, President and C.E.O. of Palm Beach International Raceway, â€œAs the most innovative and largest touring Import drag racing series in the nation, Import Face Off is an event not to be missed.â€

An eclectic event, Import Face Off offers much more than a race and a car show for spectators. The roars of the cars will compete for the highest decibels against live DJâ€™s and the Stereo Crank it Up Contest in purpose built demo cars sponsored by SoundOff. Automotive parts and manufacturers will line the vendor and pit midway to display the latest automotive accessories for import enthusiasts.

Prices for Competition and Test & Tune racers are $30 â€“ competitors can preregister online for $5 off competition fee. Car show entrant fee is $30 and comes with a free trial Performance Auto and Sound Magazine. Spectator tickets can be purchased at the gate for $17.

About Import Face Off:

Import Face-Off is known for being the most innovative Import series in the U.S. with event activities that follow current market trends. The Import Face-Off series has hosted over 140 events since 2001, and is the only national Import racing series that tours from coast-to-coast. IFO events are covered by Import Tuner magazine, Performance Auto and Sound Magazine, Super Street magazine. Import Face Off was founded and is run by a true Import enthusiast, Cliff Wallace. For more information and race rules, visitwww.importfaceoff.net

Palm Beach International Raceway, formerly Moroso Motorsports Park, was purchased by a group of real estate and corporate investors. The newly re-branded and re-designed state-of-the-art venue is rapidly becoming one of the most popular raceways in the country for racers and spectators alike. As a leader in its operating form and function, PBIR seeks to provide its drivers with a higher level of challenge, excellence and opportunity. PBIR boasts three completely refurbished, exceptionally designed tracks, including a high-performance road course, an all-concrete drag strip and a 7/10â€™s mile karting track and new karting center. The technologically superior two-mile road course features some of the fastest and most challenging corners and straight-aways offered by any track in North America. PBIR is currently sanctioned by the International Hot Rod Association (IHRA) and is pending certification by the FÃ©dÃ©ration Internationale de lâ€™Automobile (FIA), the governing body for many major racing events. For more information on PBIR, please visit the venueâ€™s website atwww.RacePBIR.com