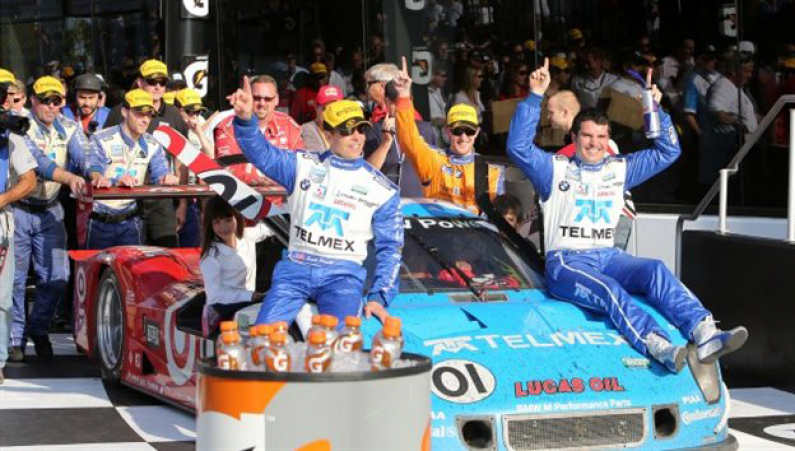 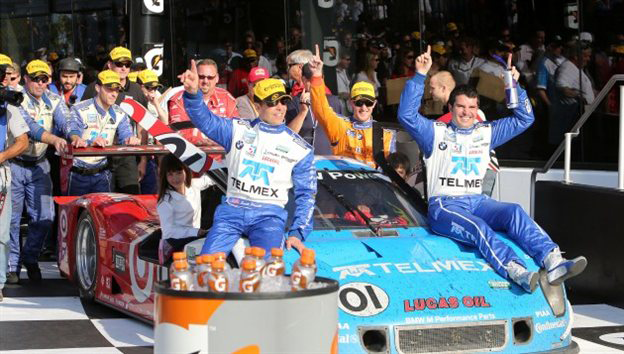 DAYTONA BEACH, Fla. (Jan. 27, 2013) â€“ Chip Ganassi Racing with Felix Sabates was clearly the team to beat throughout the 51st running of the Rolex 24 At Daytona. A couple teams, however, came close to doing just that over the final few hours of the twice-around-the-clock race around the 3.56-mile Daytona International Speedway road course. 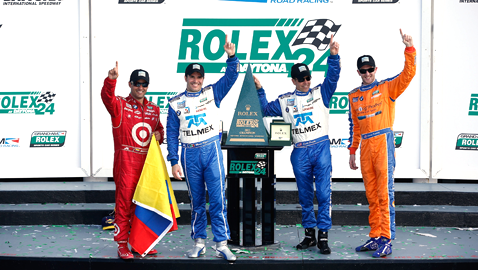 In the end, however, the No. 01 TELMEX/Target BMW/Riley team of Scott Pruett, Memo Rojas, Juan Pablo Montoya and Charlie Kimball gave CGRFS its fifth victory in 10 attempts at the Rolex 24. In the process, Pruett joined Hurley Haywood â€“ who served as the eventâ€™s grand marshal â€“ as the only drivers to claim five overall Rolex 24 victories.

â€œIt’s just an incredible day all the way around, winning with these guys, winning with Chip, with TELMEX and with BMW,â€ Pruett said. â€œThen at the end of it, having gotten to know Hurley real well over the years by racing with him and just as a friend â€“ and to have him there at the end â€“ was pretty special. It was a very special thing.â€

With its victory CGRFS has an early lead in the North American Endurance Championship presented by VISITFLORIDA.com. The NAEC is a three-race competition that includes the Rolex 24 at Daytona, Sahlen’s Six Hours of The Glen and the Super Weekend at the Brickyard at Indianapolis Motor Speedway.

Despite the strength of the No. 01, the DP lead changed hands six times over the final 90 minutes between Montoya, Max Angelelli in the No. 10 Velocity Worldwide Corvette DP and AJ Allmendinger, whose No. 60 Michael Shank Racing team rallied all the way back from a seven-lap deficit early in the race. A dramatic final hour saw both Montoya and Angelelli try to stretch their fuel loads to the finish, while Allmendinger was effectively removed from contention for the victory with an unscheduled pit stop after contact with Joao Barbosa in the No. 9 Action Express Racing Corvette DP. Montoya and the Ganassi team blinked first as Montoya surrendered the lead to Angelelli when the No. 01 came to pit lane for a splash with seven minutes to go. Angelelli came into the pits on the next lap and moved Montoya back to the front in a race-record 77th lead change. The Colombian crossed the stripe 21.922 seconds ahead of Angelelli, who teamed with Jordan Taylor and Ryan Hunter-Reay in the No. 10 machine. Allmendinger and co-drivers Ozz Negri, John Pew, Justin Wilson and Marcos Ambrose placed third in the No. 60. Allmendinger, Negri, Pew and Wilson were the raceâ€™s defending champions. The GT race came down to a battle between European luxury manufacturers Audi, Ferrari and Porsche. Similar to the action in DP, the GT race also saw a number of lead changes over the final hours and fuel concerns coming to the checkered flag. Filipe Albuquerque drove the No. 24 Alex Job Racing WeatherTech Audi R8 GRAND-AM into the GT lead for the final time with a little more than 40 minutes remaining. He went on to win by 1.476 seconds ahead of Rene Rast in the No. 52 Audi Sport Customer Racing/APR 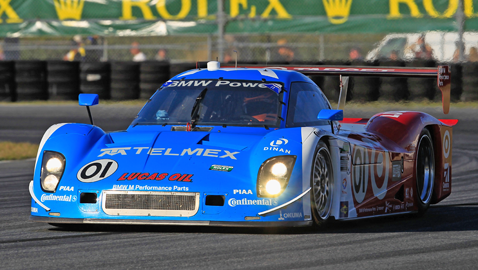 Motorsport Audi R8. Albuquerque and co-drivers Oliver Jarvis, Edoardo Mortara and Dion von Moltke gave Audi its first victory in GRAND-AM Rolex Sports Car Series competition. â€œIt is the first one for Audi at Daytona and I am a part of, hopefully, a long run here,â€ said team owner Alex Job. â€œThe win was a real team victory.Â My team, combined with the Audi Sport Customer Racing technical support staff â€“ and of course a group of great drivers â€“ made it all work. The Audi clearly had the speed and it was positioned to win.â€ Rast combined with Frank Stippler, Marc Basseng and Ian Baas to finish second in the No. 52. Markus Winkelhock may have given Audi a top-three sweep had his No. 13 Rum Bum Racing Audi R8 GRAND-AM not run out of fuel on the final lap. That moved No. 69 AIM Autosport Team FXDD Ferrari 458 Italia teammates Emil Assentato, Nick Longhi, Anthony Lazzaro and Mark Wilkins to third in GT.
The debut race for the new Rolex Series GX class was all about the No. 16 Napleton Racing Porsche Cayman. Shane Lewis started from the class pole position and combined with co-drivers Jim Norman, David Donohue and Nelson Canache to lead the class for almost the entire race. â€œFor us it was a race of preparation,â€ Donohue said. â€œOur guys did a superior job when this program was conceived in early November of building a car, making it reliable and keeping the stock parts â€“ which are surprisingly many, many stock parts on this car â€“ where they needed to be. The proof is in the pudding.â€ Second in GX went to the No. 22 Bullet Racing Porsche Cayman GX.R team of Darryl Oâ€™Young, Daniel Rogers, James Clay, Seth Thomas and Karl Thomson. The No. 38 BGB Motorsports Porsche Cayman GX.R team of Lee Davis, Ryan Eversley, Jeff Mosing, Eric Foss and John Teece took third in class.