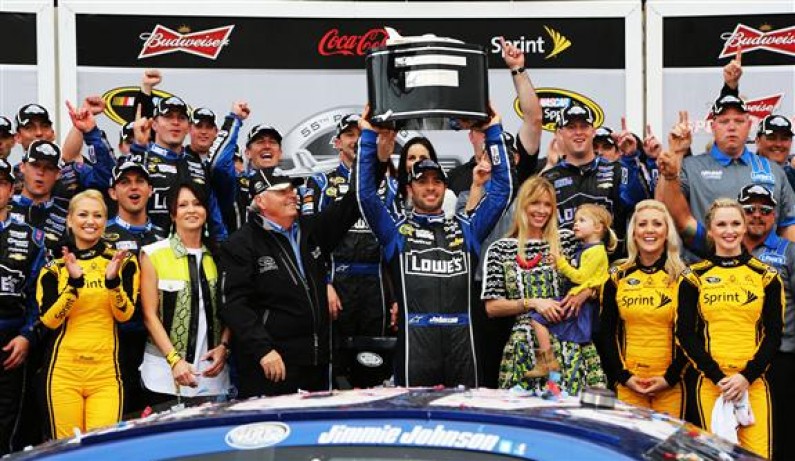 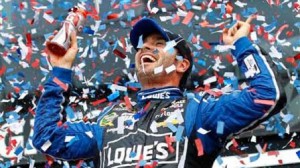 DAYTONA BEACH, Fla. — Jimmie Johnson sped away from the field after a restart with six laps left in Sunday’s Daytona 500 and held off a charging Dale Earnhardt Jr. to win the 55th running of the Great American Race at Daytona International Speedway.

The victory was the 61st of Johnson’s career in his 400th start in the NASCAR Sprint Cup Series and his second win in NASCAR’s most prestigious race. 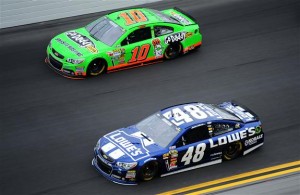 Polesitter Danica Patrick came home eighth, the best-ever finish by a woman in the Daytona 500.

With tandem racing all but absent in the points race for the new Gen-6 race cars, passing was difficult and track position paramount.

“You can’t ride and wait for things to happen,” Johnson said. “You have to race all day long and fight for track position. This race car, this Lowe’s Chevrolet was so good. (Crew chief) Chad Knaus and all of Hendrick Motorsports had me a fast car, and I could really stay up front all day long. I had a lot of confidence in the final few laps leading the train, (because) I knew just how fast the car was.”

Earnhardt got a strong push from Martin on the last lap, but couldn’t catch Johnson off the final corner.

“I couldn’t have done much without Mark helping me here at the end,” said Earnhardt, who was fourth at the white flag. “I was hoping he was thinking what I was thinking as we come off of Turn 2 on that last lap. I felt like we needed to make the move a little earlier than off (Turn) 4. 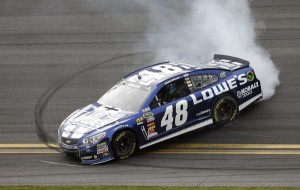 “I kept backing up, backing up, trying not to let guys get racing behind us too much. If somebody ducked out of line a couple rows behind Mark, I was going to have a gap, (and) me and Mark could take off, not get hung up with those guys. Once we come off of 2, mashed the gas, got a run on Danica, side-drafted her a little bit.

“I don’t know why them guys didn’t pull down in front of me besides Jimmie, but we got through 3 and 4 with a pretty good run. Once we come to Turn 4, we kind of run out of steam, didn’t have enough to get a run on Jimmie.”

After a restart on Lap 182, following the fifth caution of the race for Jeff Burton’s hard contact with the outside wall at the entrance to the tri-oval, Keselowski and Johnson ran side-by-side at the front of the pack, trading the lead as their respective lanes gained momentum. 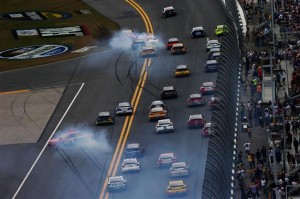 A caution for debris on Lap 192 set up the six-lap dash to the finish with Johnson in the lead in the outside lane.

Patrick made history when she led the field to green from the pole position. On Lap 90, she reached another milestone. Surging to the lead after a restart, she paced the field on Laps 90 and 91, and, in doing so, became the first female driver to lead a lap in the Daytona 500 and the first female to lead a green-flag Lap in the Cup series.

Later in the race, Patrick led three more laps, for a total of five, to tie Guthrie’s five.

Despite the success, Patrick was reluctant to reset expectations for her rookie season in the Cup series.

“I think that would be unwise to sort of start telling myself that top 10 is where we need to be every week,” said Patrick, who was third with one lap left but fell to eighth in the last-lap scramble. “I think that’s setting up for failure. The list of drivers in the Cup series is deep. This is a unique track. These (restrictor-plate) tracks are different and unique. (It’s) a lot about the car.

“I mean, you have to be smart enough to do the right thing at the right time, but it’s very much about the car. I feel like I’m still sticking to ‘Let’s see how these first five races go,’ where we go to a bunch of different kinds of tracks, see where we settle in, start to establish goals from there on out.” 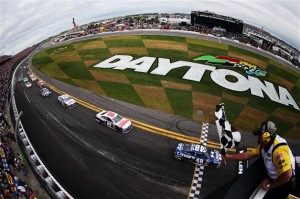 The Toyota Camrys of Joe Gibbs Racing were running 1-2-3 as the race neared the three-quarter mark, with Matt Kenseth pacing Denny Hamlin and Kyle Busch. On Lap 150, however, Kenseth, who led four times for a race-high 86 laps, brought his car to pit road, having felt a vibration in the drive train. Busch parked his car two laps later, with a blown engine.

That left Hamlin at the point as the field ran single-file behind him, in a lull before the late-race pyrotechnics.

A nine-car accident on Lap 138, thinned an already depleted field. With most cars running single-file around the top of the track, Keselowski tapped David Reutimann and dropped abruptly to the apron in Turn 1.

That triggered a melee as cars checked up behind Keselowski. Carl Edwards was a victim of the accident, as ill fortune at Daytona continued to haunt the driver who already had wrecked four cars at Daytona this year.

The first major wreck of the race — on Lap 33 as the double-file lead pack of cars exited the tri-oval — dashed the hopes of former Daytona 500 winners Kevin Harvick and Jamie McMurray, as well as those of pre-race favorites Tony Stewart and Kasey Kahne.

As the field stacked up toward Turn 1, Kyle Busch tagged the back of Kahne’s car, turning Kahne into Juan Pablo Montoya’s Chevrolet SS and igniting a nine-car incident that also damaged the cars of Keselowski, Kurt Busch and Casey Mears.

Keselowski suffered damage to the both sides of his Ford, pinballing off both Montoya and Harvick, but was able to continue. Kurt Busch lost a lap on pit road with the nose of his Chevy caved in from contact during the wreck. Casey Mears, who had qualified 17th, also sustained significant damage.