IRVINE, Calif. (October 8, 2013) â€“ Marketplace Events Motorcycle Group has announced that the American International Motorcycle Expo (AIMExpo) will launch on the morning of Wednesday, October 16, with Turning Point. The fast-paced, up-tempo perspective of the motorcycle and greater powersports industry will set the tone for the most groundbreaking motorcycle event to come to the North American marketplace.

â€œTurning Point refers to how AIMExpo has become an agent of change for the industry by bringing a long overdue energy to the marketplace,â€ said Kerry Graeber, Marketing Director Marketplace Events Motorcycle Group. â€œAs powersportsâ€™ first combined trade, consumer, and media event in the United States, AIMExpo has literally changed the conversation in our industry. Mirroring the model of successful European supershows like EICMA, AIMExpo very much fills a void in the event landscape and offers an all new direction to the powersports business.â€

Launching at 9 a.m. EST Wednesday in the Orange County Convention Centerâ€™s Chapin Theater, Turning Point is the â€˜donâ€™t missâ€™ kick-off for everyone â€“ dealers, exhibitors and media – attending AIMExpo. Hosted by veteran motorcycle television personality Greg White, the program will celebrate the history of motorcycling while also looking ahead to a brighter future, with AIMExpo serving as a driver of that success.

The multimedia event will also feature an appearance from special guest and American International Motorcycle Champion Kenny Roberts, while AIMExpoâ€™s own Larry Little will deliver a brief keynote message for the fast-paced 30 minute program that concludes with a ribbon-cutting ceremony at the expo hallâ€™s grand entrance.

â€œFrom the earliest moments, we spoke of returning energy, excitement, efficiency and effectiveness to the industry in a combined B2B and B2C setting, and now we get to deliver.Â  Turning Point will seize the moment and open AIMExpo in a powerful way that speaks to the passion we all associate with motorcycling and powersports,â€ said Little, Vice President and General Manager of the Motorcycle Group. â€œThis is a new chapter that is only possible because the marketplace embraced our vision of â€˜one place, one time, right place, right timeâ€™, for which we are so very grateful.â€

The inaugural AIMExpo will revolutionize the Powersports industry as North Americaâ€™s first combined consumer, trade and media event. It will be held on October 16-20, 2013 at the Orange County Convention Center in Orlando, Fla.

For more information, visit the AIMExpoUSA.com web site, and keep up to date on the continued progress by visiting AIMExpoâ€™s social media pages. â€œLikeâ€ the American International Motorcycle Expo on Facebook by visiting the AIMExpo page, and â€œFollowâ€ on Twitter: @AIMExpo 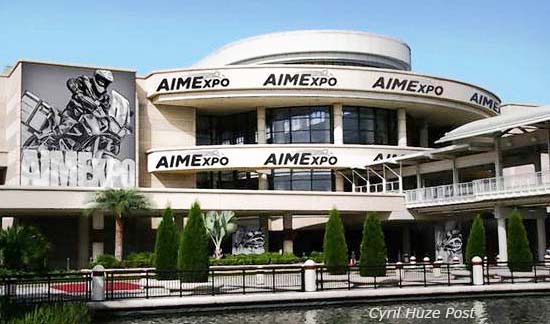 At last, motorcyclingâ€™s first combined trade, consumer and media event in North America.Â  For the first time… in the right place at the right time… the entire industry will come together for an unparalleled celebration of motorcycling, the motorcycling lifestyle and the business of motorcycling. The celebration will also feature motorcycling related products like Scooters, ATVs, and Side-by-Sides, all enjoyed by like-minded enthusiasts.

AIMExpo will include OEMs, distributors, parts & accessories manufacturers, dealers, consumers and the media.Â  Unlike any existing show in the United States, AIMExpo will serve the entire industry and is being produced by motorcyclists for motorcyclists.

The American International Motorcycle Expoâ€™s purpose is to serve as the catalyst to bring together industry, press, dealers and consumers in a single arena that creates a grand stage for motorcycling in the U.S. and North America, and delivers an efficient and energetic market-timed expo platform for B2B and B2C in the motorcycle industry.

AIMExpo is the single most important show of its type in the North American market and will have international impact within the motorcycling community.

Debuting in the Fall of 2013, the showâ€™s format brings together all constituents of the motorcycle industry in one place, at one time, with one show. Efficient!

Dedicated days for trade/press open the show. Both motorcycle dealers and the press will see new product for the first time, and while dealers are ordering for the upcoming season, press is building excitement among consumers for all thatâ€™s new. Effective!

Within 48 hours of the first announcements in the press, the show opens for 3 premiere days to Excited consumers. Energy!

The hallmark of the American International Motorcycle Expo will be to Energize the industry, Excite the consumer, while providing an Efficient platform to conduct business in the most Effective fashion.