After nearly 20 years away, John Force Racing returns to Chevrolet/GM in 2015 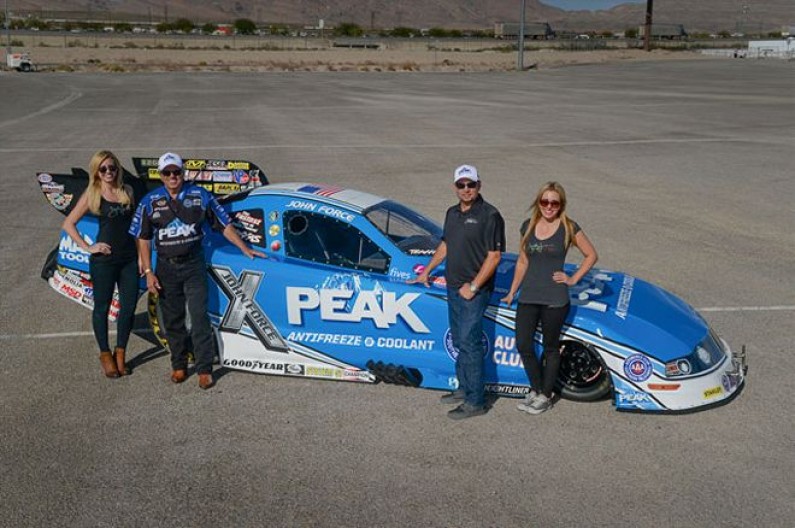 After months of rumors and speculation about which car manufacturer he’ll represent, 16-time NHRA Funny Car champ John Force has made it official.

Force announced Thursday in a teleconference that after nearly 20 years with Ford as the manufacturer of record on his Funny Car and those of daughter Courtney and son-in-law Robert Hight, John Force Racing has now switched affiliations and will return to Chevrolet, where the winningest driver in drag racing history began his professional career more than 30 years ago.

“We signed the deal right before Christmas,” Force said. “That was the biggest Christmas present I’ve ever gotten.”

“I get the opportunity to go back to my roots,” Force said. “It’s personal for me. I got my first (NHRA) win with Chevrolet, my first championship with NHRA and six (championships) overall with GM.

“People wanted to know ‘where’s he going with the manufacturer?’ Everybody told me they wanted me to stay with Detroit. GM was where I wanted to land.

“At the end of the day, if you don’t have a manufacturer, you’re in big trouble. … It’s a change and change is good. I’m ready to go drag racing. It’s an exciting time.”

With no other Chevrolet-branded Nitro Funny Cars in the sport, John Force Racing will essentially have the Chevy brand exclusively all to itself.

“That was it,” Force said when asked by MotorSportsTalk. “That was key with my past with GM. We got an exclusive. … We’re just getting started. This whole thing, you don’t do all this change overnight. We’re going to hit the track running.

“We’re going to have our first test at Phoenix next Monday. I have great financial backing with GM. … We have an exclusive and that makes it great. Ain’t nobody that loves drag racing more than I do. I feel like a little kid, I feel like I’m 16 all over again. But in that race car, I’m 21 again and I’m a bad hombre when you put me in a firesuit.”

The agreement between JFR and Chevrolet is a multi-year deal.

“It’s a big day for the sport,” NHRA president Tom Compton said. “Welcome back, GM. We’re really proud to work for you.”

Ford announced near the end of the 2013 season that 2014 would be its last with Force, choosing to allocate resources in another direction in its motorsports program in 2015.

Ford followed Castrol Oil, which had sponsored Force for the last 30 years, in leaving the Force camp at the end of the 2014 season to go in another direction.

“I was in trouble and dancing like a mad man (for funding),” Force said. “We did approach others in the industry, but my heart’s with Detroit. My company is called ‘John Force, American Made.’ It’s where I needed to land. My other partner (Ford) was great, but this is a new relationship.”

Initial reports had John Force Racing potentially signing with Dodge to represent its HellCat R/T Challenger or Charger. There were also reports that Force was also talking with Toyota.

The HellCat is the most powerful stock street car built in the U.S., with 707 horsepower under the hood. At the present time, no NHRA Funny Car team has affiliated with the HellCat.

Despite all the rumors and media reports, Force surprised those on the conference call when he said, “I never had a conversation with Dodge.”

“My conversation with Toyota, we had a brief conversation, but nothing in writing or on the table,” Force said. “This is where I wanted to land. I’m back to my roots, back to where I started. This is an easy transition for us.”

Chevrolet won 11 major championships in five different forms of motorsport in 2014 (including Erica Enders-Stevens winning the NHRA Pro Stock championship) and looks to have Force to win a record 17th Funny Car championship in 2015.

“We need John Force Racing, every person in the organization, to focus and win races and championships for us,” said Jim Campbell, Chevrolet Vice President for Performance Vehicles and Motorsports. “We’re excited about getting to the race track, John, and welcome home.”